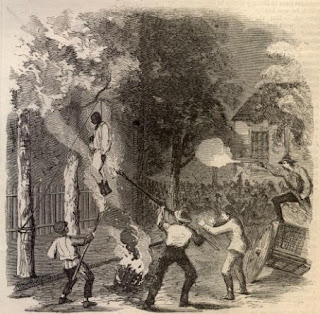 Despite the battles fought in Louisiana during the Civil War—Port Hudson, Mansfield, Pleasant Hill, and others—more violent deaths probably occurred in the state during Reconstruction than in the war itself. Lawlessness reigned in many parts of the state from the war’s end in 1866 through the 1870s, from highway robbery to the intimidation and murder of freed blacks and office-holding carpetbaggers.

In many instances, local white citizens who viewed the new freedoms given former slaves as an affront to Southern society resorted to vigilantism to put blacks in their place and terrorize the Republican officials who protected them. With most parish and state offices held by Republicans, the largely Democrat populace often bypassed despised local lawmen and took care of criminal offenders themselves.

Reconstruction officially ended in 1877 with the removal of federal troops from the South and white Democrats resumed control over most public offices. The animosity of the post-war years remained.

The Crescent Plantation arose from the Mississippi Delta soils of what is now Madison Parish in the 1830s. Consisting of over two thousand acres, the estate on Brushy Bayou was one of the largest in northeast Louisiana. In the 1890s, the plantation was the home to numerous black freedmen and their families who still worked in the same fields their ancestors tilled as slaves. Most owned little or nothing—a pig or two, perhaps a milk cow or a horse. A few owned firearms but mostly they possessed little more than their fathers had before the Civil War.

While the prominent Darcy family owned the Crescent, the workers were supervised by a white man named J. K. Boyce. Little is known of Boyce. His name does not appear on the Madison Parish tax rolls of the late 19th Century. He probably lived in a small home on the plantation. Whether he had family on the plantation is unknown.

Toward the end of April 1894, Boyce’s lifeless body was discovered on the plantation.

The story of the hunt for the culprits were told in an Associated Press story that appeared in newspapers across the country:

The Unfortunate Affair Has Already Resulted in Nine Deaths.
Boyce, Who Was Killed First, and Eight Negroes Who Were Killed In Retaliation –Bloodhounds Tree the Negroes – Twenty-Five Assassins Caught.


New Orleans, La., April 28. Four more of the Negroes who were connected with the murder of J. K Boyce, in Madison parish last week, were captured Thursday night by the sheriff's , posse, and, as was expected, were lynched seen afterward. This affair has already resulted in nine deaths. Boyce, the white overseer, who was first killed, and eight Negroes, who were killed in retaliation: Harris Williams shot, and Tom Claxton, Dave Hawkins, Sam Slaughter, Shell Claxton, Temp Claxton, Scott Harvey and Tony McCoy, lynched. Of these the first three were lynched Sunday night, and the other four Thursday night.

The killing of Boyce occurred last Friday, and ever since then the posse has been hunting for the Negroes who were supposed to have had part in the affair. The posse, which was composed of 200 white men, half the total number in Madison parish, where the Negroes are twelve to one white, split up into half a dozen parties and scoured the entire country. The Negroes were supposed to have taken refuge in the triangular swamp between Milliken's bend and Omega and the river. All these points were watched, particularly the river, to prevent the Negroes from escaping into Mississippi. Bloodhounds were obtained to track the men, but the scent was cold.

After several days' hunt the sheriff dismissed most of his posse, but some fifty men remained on duty. Thursday, however, the scent was taken up by the dogs, and it was evident that the pursued men had been cornered in Buckhorn weeds, a comparatively small body of swamp. The sheriff called for reinforcements and 200 men responded.

The gang were treed in a cabin between the weeds and river. They had made arrangements with a Negro to take them across the river, and would have succeeded in escaping to Mississippi if it had net been for the prompt action of the posse.

The posse surrounded the house and called for the owner to come out. He played deaf and would net answer, and he was told if he did not come out, and surrender the men the officers would fire on the house. He still refused to answer, and a volley was fired into the roof of the cabin. The Negro came out and said the fugitives were not in, and that he did not know where they were. The posse then searched the premises, and in the loft of a small crib in the yard four of the assassins were found huddled up together, Pomp Claxton, Shell Claxton, Scott Harvey and Tony McCoy. They were promptly arrested, and Sheriff McClelland deputized twelve of the posse to take them to Tallulah.

The Negroes were without guns having thrown them away in the flight. When pursued by the bloodhounds, of which they were afraid, they scattered, too, and only came together Friday night, when they were caught. One of the men, Tem Griffin, was lost sight of and not captured, and it is thought has escaped to Mississippi.

As the sheriffs deputies, with the prisoners, got near Milliken's bend, an effort was made by a crowd to take them away from the officers, but the officers resisted and got as far as the Sherly place, about two miles from Tallulah, when a crowd of about two hundred met them, overpowered the officers und took the four Negroes to the Crescent place, where the four leaders, Shell Claxton, Pomp Claxton, Scott Harvey and Tony McCoy, were hanged on a tree about one hundred feet from where they killed Boyce. The execution was conducted very quietly, the people living in the city knowing nothing about them until Friday morning, when they were surprised to find four assassins hanging near their doers. The only one of the pursued Negroes at large is Tom Griffin. If caught he will be lynched like the others, but it is thought he has escaped.

There were twenty-six Negroes in all on the Crescent plantation who were suspected of complicity in the killing of Boyce. Eight have been killed, one is at large, and seventeen are prisoners in the parish jail. It is scarcely likely that there will be any more lynchings unless Griffin is caught. The prisoners will be tried for murder and will probably be hung legally. 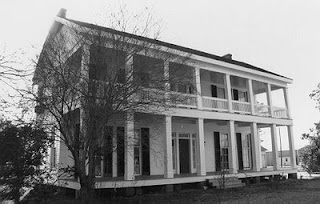 *      *      *
The Crescent Plantation’s two-story frame mansion of late Greek Revival architecture still remains, testament to the strife of the Civil War and the dark, bloody days of Reconstruction. It is located on Louisiana Highway 602, about two miles from its intersection with Interstate 20, a few miles southeast of Tallulah.That 26 men were involved in one murder sufficiently to face criminal charges seems farfetched. Perhaps some or most were present at the event but mere presence does not establish the elements of the crime of murder. More likely, vengeance struck a wide swatch through the plantation population, marking all adult black men tacitly responsible for Boyce’s death.
Posted by Wesley Harris at 7:09 PM