When Huey Long was elected to the United State Senate in 1930, he was reluctant to give up control of his post as Louisiana’s governor. He refused to permit Lieutenant Governor Paul Cyr to move up and assume the office. Instead, he delayed officially taking his Senate seat until closer to election time, and, for a time, he seemed to hold both offices. Cyr eventually lost a court battle and his position as lieutenant governor.

When Long did leave the governorship, he intended to maintain complete control of the office of Louisiana’s chief executive. His plan was to ensure one of his puppets took the office. O.K. Allen was Long's floor leader in the Louisiana Senate and Long placed his support behind the man he could control in the governor’s office.

Nicknamed the Kingfish after a stereotypical, smooth-talking conman in the Amos and Andy radio show, Long was either loved or roundly hated by Louisianans. No middle ground existed. When he went out in public, citizens wanted to hug him or hit him. As many as six or seven bodyguards in plainclothes, often backed up by more visible uniformed National Guardsmen, went everywhere with Long. 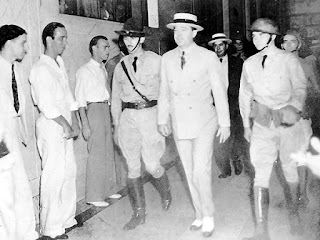 In his book, Louisiana Hayride, Harnett Kane described the tactics used by the bodyguards. “The protection men snarled at luckless Louisianans who got in Huey’s way, and used their fists sometimes if the path was not cleared quickly enough. As to reporters and photographers, Huey told his men to ‘let go.’ That order meant sluggings from
Read more »
Posted by Wesley Harris at 9:18 AM 0 comments