Some concepts resist definition. Honor. Justice. Liberty. Duty. Freedom. One Supreme Court justice, when faced with the dilemma in a pornography case “trying to define what may be indefinable,” famously said that he couldn’t define pornography it but sure knew it when he saw it.


Jim Cullen had the same problem in defining the notion of the American Dream. In his book The American Dream: A Short History of an IdeaThat Shaped a Nation, Cullen identifies examples that illustrate the American Dream. The closest he comes to a succinct definition is pinpointing a phrase from the Declaration of Independence as defining the American Dream:
“…we hold these truths to be self-evident, that all men are created equal, that they are endowed by their Creator with certain unalienable rights, that among these are Life, Liberty, and the Pursuit of Happiness.” 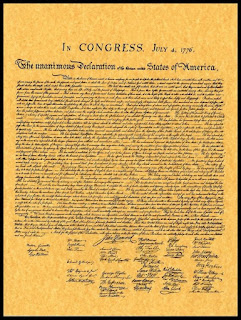 Each “Dream” Cullen describes in the book “rested on the language, prestige, and confidence of the Declaration of Independence.”  The Declaration, he says, is the charter of the American Dream. And yet, some do not recognize the power of the Declaration in promoting the American Dream. When a Louisiana legislator offered a bill that students should learn the Declaration in school, other politicians blasted the treasured document as “racist,” apparently ignorant of its import to the American Dream that, at least today, applies to all.
I cannot define the American Dream.  But like the stumped Supreme Court justice, I sure know what it is.  It brings people to America to pursue aspirations unavailable to them elsewhere.  For example, Cullen notes that in 1900, German, Irish and Polish immigrants to the United States owned homes in numbers "that would have been virtually inconceivable in Europe at the time.” The Dream provides the impetus for invention, innovation, and the entrepreneurial spirit.  It’s what pushes people to be all they can be.
The American Dream compelled families to load their belongings in wagons and head west for  new beginnings to achieve what had eluded them so far. Cullen states “If there is one constant in the Declaration of Independence, it lies in the way no version of the status quo is ever completely acceptable.” The urge for a better life, a continuous improvement of circumstances, drives the American Dream. In 1862 my great-great-grandparents loaded a few belongings in a two-wheeled cart pulled by oxen, and taking their children by the hand, left Georgia and walked a thousand miles to settle in a desolate spot in North Louisiana.  They sought the Declaration’s “Life, Liberty, and the Pursuit of Happiness” and they sought it on their own.
President Barack Obama stirred controversy in 2012 when he seemed to minimize the effort of individual hard work in achievement in what is referred to as the “You didn’t build that” speech:

“The point is, is that when we succeed, we succeed because of our individual initiative, but also because we do things together. There are some things, just like fighting fires, we don't do on our own. I mean, imagine if everybody had their own fire service. That would be a hard way to organize fighting fires.

“…look, if you've been successful, you didn't get there on your own. You didn't get there on your own. I'm always struck by people who think, well, it must be because I was just so smart. There are a lot of smart people out there. It must be because I worked harder than everybody else. Let me tell you something – there are a whole bunch of hardworking people out there.
“If you were successful, somebody along the line gave you some help. There was a great teacher somewhere in your life. Somebody helped to create this unbelievable American system that we have that allowed you to thrive. Somebody invested in roads and bridges. If you've got a business – you didn't build that. Somebody else made that happen. The Internet didn't get invented on its own. Government research created the Internet so that all the companies could make money off the Internet.”
Former Massachusetts governor Mitt Romney, Obama’s opponent in his campaign for re-election, criticized the "you didn't build that" statement. “To say that Steve Jobs didn't build Apple, that Henry Ford didn't build Ford Motors, that Papa John didn't build Papa John Pizza ... To say something like that, it's not just foolishness. It's insulting to every entrepreneur, every innovator in America.”
The primary critical argument against the President’s assessment was termed “a matter of emphasis” by one observer. Obama’s belief that government solves all problems and success is unlikely without it is contrary to the American Dream. The Founding Fathers viewed the only way to achieve “Life, Liberty and the Pursuit of Happiness” was to get the British government out of their lives.  They sought freedom to pursue their American Dreams and that meant being in command of their own lives.  Thomas Jefferson, as Cullen reminds us, believed that the system that governs best governs least. By emphasizing government over the efforts of individuals, the President did nothing to encourage and inspire. It was a far cry from President John F. Kennedy’s counsel to “Ask not what your country can do for you. Rather, askwhat you can do for your country.”
Americans achieved lofty goals and fulfilled their wildest dreams before government ever grew into the bureaucracy it is today.  My great-great-grandparents moved west, built a home, tilled a farm, and provided for a large family with no help from the government during the lean years of civil war and Southern Reconstruction. They, and the Founders as well, would be appalled by the size of American government today and would wonder if we are so weak and helpless that we cannot attain our American Dream without it.
Cullen lists the desire to own a home as one of the most widely realized American Dreams. My parents dreamed of a large ranch-style home on acreage beyond the city limits to raise their three sons. Their dream was fulfilled through a combination of personal initiative and government help—a balance that President Obama failed to make clearly in his speech. The V.A. loan they could obtain would not cover a home of the size they wanted if it was sided with brick with a massive fireplace as the centerpiece of the family room. Instead of settling for less than fulfillment of their Dream, and drawing on their determination to see it through, they scoured the countryside for old house sites where all that remained were brick chimneys and foundations. Cajoling the owners into permitting them to haul off old brick, my parents saved thousands of brick. As I child I helped them pull down old chimneys and carefully clean the old mortar off mountains of antique brick.  They achieved their Dream but it took backbreaking hard work. But they did build it.
Some say government can aid the downtrodden in achieving their American Dreams, while others protest that government interference in the form of taxation, regulation, and obfuscation prevents them from realizing theirs. That argument won’t be settled any time soon, but it may be one that must be resolved for American Dreams of the future to be realized.
Posted by Wesley Harris at 11:32 AM 0 comments


Allen Greene typified the Reconstruction-era “scalawag”—a local citizen who allied himself with the Radical Republicans who controlled national and state government to achieve personal political and financial aspirations. Scalawags were considered traitors to the South. They were just as bad, if not worse, than the carpetbaggers from the North. 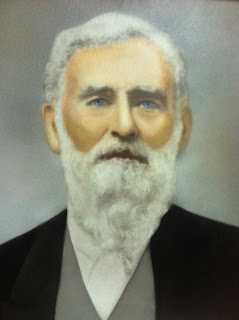 Both respected and despised, Greene was a savvy businessman and generous and sociable neighbor. While he opposed Louisiana’s succession from the Union before the Civil War, he supported individual Confederate soldiers—his son fought for the South. Unlike most Unionists, he was a slaveholder. After the war, however, he was quick to side with the victors and create his own political dynasty in the heart of the Democrat majority. His choice of allies led to death threats and even a gunfight that left him wounded.


In 1872, federal troops were stationed throughout Louisiana to Federal troops occupied the region at the time, ostensibly to enforce Reconstruction, protect freedmen, and support U.S. marshals and local officials in enforcing the law.  The fall elections for state and local offices were destined to be plagued by controversy and conflict and Jackson Parish was no different.


Judge Evander McNair Graham was a highly respected attorney and former Confederate officer who seemed certain to win the state senate race for the district including Jackson Parish. His support extended well beyond the parish seat of Vernon as he had served clients throughout the region and former soldiers from his command lived all over north Louisiana. No one expected Allen Greene to enter the race.


Greene waited until Election Day to add his name to the ballot, a move that upset many in the local electorate. The last thing they wanted was a scalawag elbowing into the election process at the last minute. With Greene at the polls in Vernon were his three
sons William, Charles, and Jackson. Jackson Greene was a commissioner of the election at the polls, keeping a tally sheet. Charles had been appointed a United States commissioner to monitor the election. Since the supervisor was very slow in preparing the tally of the vote, Allen Greene decided to go home to Greensborough, his home west of Vienna and return the following day to examine the results. The count showed Graham garnering twice the votes of Greene and another candidate combined. However, Greene claimed victory to the outrage of the local citizenry. Longtime friends took offense and battle lines were drawn.

How Hollywood helped choose the prettiest girls on campus


In the 1930s and 40s, many colleges called upon well-known artists, actors, cinematographers, and other celebrities to select the beautiful coeds to appear in the schools’ yearbooks.

Louisiana Tech also adopted this policy in the 1930s. In the 20s, a single coed was usually selected annually as the school’s “most beautiful” or “prettiest girl” for the Lagniappe, the college’s yearbook. A bevy of campus beauties was first selected in 1929 by vote of the students.

Read more »
Posted by Wesley Harris at 9:46 AM 0 comments