These are photos from some of my travels to historical sites over the past four years.

Arlington National Cemetery across the Potomac River from Washington, D.C. performs nearly 30 funeral services each day.  Most of burials are military veterans from World War II, Korea, Vietnam, and the current Middle East conflicts or their spouses.
March 9 was no different with one exception—one funeral was held to inter two sailors in what was most likely the last burial of Civil War casualties at Arlington.  The sailors were members of the crew of the famed Union ironclad USS Monitor. 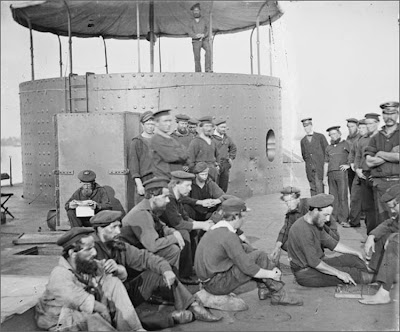 Designed by John Ericsson in June 1861, the Monitor was an armored ship with the first-ever rotating turret atop a hull that barely cleared the water. Its high-technology vibrating lever steam engine was groundbreaking technology as well. Ericsson hurried his ship’s completion, assembling it in 118 days at the naval yard in Brooklyn Navy Yard.
Read more »
Posted by Wesley Harris at 2:02 PM 0 comments

I recently visited one of the 750 prisoner of war camps established in the United States during World War II.  While there's not much left of Camp Monticello, Arkansas, many of the features of the facility are still evident in a thick pine forest.  Most WWII POW camps in the U.S. have been completely razed with no trace remaining.
Camp Monticello housed Italian prisoners of war captured in North Africa and Italy.  Other camps housed German prisoners and the few Japanese who allowed themselves to be captured.
After the war, most camps were dismantled immediately, with the buildings provided to other government entities or sold to the public.
Here are some photos from my exploration:
See more and enlarge the photos...

Although every community in the South suffered deprivations and despair during the Civil War, some were spared the horrors of armies turning their cotton fields and pastures into battlefields.  North central Louisiana, between Monroe and Shreveport and from north of Alexandria to the Arkansas state line, was such a pocket never penetrated in force by Yankee invaders until the war ended and Reconstruction began.
The small town of Vienna, then in Jackson Parish, was located in the center of this pocket.  Vienna watched the war go by as plantation owners marched their slaves west toward refuge in Texas and meager military supplies came through headed east.  Confederate armies marched through and trained on the outskirts of town but the fighting never reached the little village.  The real war, North Louisiana’s war, began with chaos of Reconstruction as white Democrats fought Radical Republican control of local offices and state government with the assistance of federal troops.  More blood flowed from lawlessness and clashes with the government and freed blacks than was ever experienced in the region during the war.  Vigilantism was the norm to correct perceived wrongs that the carpetbag government refused to rectify.
But Vienna thrived after the war, rivaling the parish seat of Vernon in size.  It boasted hotels and a number of stores and churches and even cultural activities.  There was a dancing school, operated by two men—Peace and Whatley—who also gave lessons in Vernon and perhaps elsewhere in Jackson Parish.  Rumors abounded, however, about what was really happening at the men’s dance studio.  There was something sinister and disturbing about the men.  Supposedly, they were from Natchitoches but had spent time in Texas where one of them had killed a man. 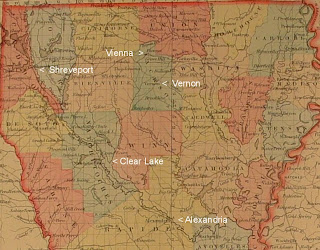 On the evening of March 12, 1872, a young local man who had imbibed too much liquor accompanied Peace into Dr. Jackson’s drug store.  The man was loud and obnoxious.  Jackson told the rowdy youth to leave the store.  He snapped back with a rude remark and the doctor replied in kind.  Peace then stepped forward in support of the youth and made remarks of his own.  "Do you take it up?"  the doctor asked.  The men were now in front of the store where 54-year old John Huey, Jr., and Whatley, Peace's partner, were standing.  The exchange of words led Huey to step forward to back up Dr. Jackson and say, "Fighting is the game, is it?"
Read more »
Posted by Wesley Harris at 11:58 AM 3 comments

A MAYOR and HIS MURDEROUS SIBLING


They were born in County Clare, poor as the rocky Irish soil, and came to America for a new start after their parents died. One became a popular public servant, the other a brutish killer.

In 1849, Jim and Andrew Currie sailed with their older brother Michael from Cork, Ireland. Andy was only six, Jim two years older. Landing at Boston, the brothers settled in New York City. In 1859 at age 16, Andrew ventured out on his own and found employment in Shreveport as a store clerk. After serving the Confederacy in the Civil War, Andrew returned to Shreveport as a deputy sheriff. His fortune rose as a very successful insurance agent and influential businessman. Elected mayor of Shreveport as a Democrat in 1878, Andy Currie developed the city’s first water and sewer systems and built a bridge across the Red River while maintaining financial interests in the railroad and other business ventures.


The life of brother Jim took a different direction. One writer called Jim Currie “one of the most depraved specimens that ever visited the western country. He was the embodiment of everything bad and disreputable, the very quintessence of all wickedness, and a living personification of crime in its worst forms, without a single redeeming quality. No person was safe against his attacks; his murderous weapons were aimed at all alike.”

“Big Jim” Currie killed more than a dozen, maybe many more than that. Most were outright murders. For instance, in 1870 he went on a drunken rampage in a Kansas dance hall and killed two men and two women. Big Jim Currie was said to be the only man Wild Bill Hickok feared.

A Fixin' Up at the White House

During the renovations to the White House in the late 1940s and early 50s, President Harry Truman and wife Bess stayed across the street in the Blair House.  On November 1, 1950, two men attempted to enter Blair House to kill Truman.  One White House police officer was killed and another wounded in the biggest shootout in history involving the Secret Service.  One of the attackers was killed and the other wounded.

It was in high school American history that I learned of the attempt on Truman's life and the reason he was residing at Blair House.  But I had no idea of the magnitude of the renovations until I saw these photos.

The White House was literally gutted and the interior rebuilt.  See the slideshow at this webpage: 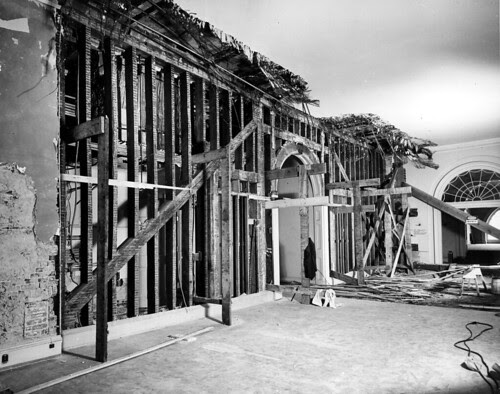 If you search "White House renovation" at flickr.com, you will find even more photos.