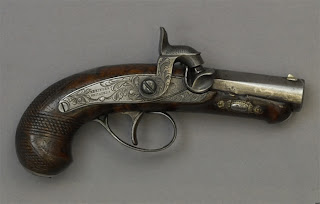 The small pistol in Ford’s Theatre National Historic Site in Washington, D.C. seems suspended in mid-air in its display case. The subdued lighting dances off the barrel eerily as stone-faced statues of the Lincoln assassination conspirators hover nearby.  Under the golden light in its gilded case, the pistol appears as objet d’art rather than an instrument of murder and national tragedy.


The pistol John Wilkes Booth selected to murder President Abraham Lincoln on April 14, 1865 is so small a man can hide it in the palm of his hand.  Civilians favored the “pocket pistol” produced by Henry Deringer, a Pennsylvania armsmaker, as a compact, concealable firearm for personal defense. Although the Deringer pistol was restricted by its single-shot capacity, its small size and weight often made it preferable over larger and heavier firearms.  Its “one and done” firing capacity could be overcome by carrying two pistols.   While there is
Read more »
Posted by Wesley Harris at 6:30 PM 1 comments