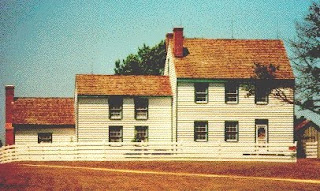 The Dr. Samuel A. Mudd House, where John Wilkes Booth found refuge after assassinating President Abraham Lincoln in 1865, is one of the most notable historic sites in southern Maryland.  Mudd gave medical treatment to Booth who injured his leg fleeing Ford's Theatre in Washington, D.C.  The doctor was convicted of aiding and conspiring with Booth.  In February, an arsonist set fire at an entrance to the Mudd House, causing only slight damage to an exterior door.  A catastrophe was averted when the fire apparently burned itself out before the building was ignited.
Intentional acts to destroy our history are inexplicable.  Why?  What could be accomplished by burning down the Mudd House or destroying any other historic site?  Yet, it occurs quite often.  Sometimes the motivation is pure greed, as in the destruction wreaked on the Vicksburg National Military Park by relic hunters.  In 2007, park rangers discovered over 100 holes dug in attempts to recover loot from the famous Civil War siege.  A few years earlier, eleven monuments at Vicksburg were spray painted by a vandal.  Vicksburg's supervising ranger said, “The park is continually plagued by varying degrees of looting, digging and excavation.  They're stealing America's heritage. This belongs to the American people.”
Under the Archaeological Resources Protection Act of 1979, it is illegal to excavate, remove, damage, alter or deface archaeological resources on federal or Indian land.  It's also illegal to traffic materials or items found on such land.  There are also state and federal laws against defacing or vandalizing property or stealing artifacts from private or public land.

A few years ago, someone attempted to burn down a 150-year old "dog-trot" style log house near my home, one of the few historic sites to be preserved in our region.  There is no logical explanation for such behavior.  Yet, the fact it is one of the few surviving historic sites nearby is evidence that we have done very little in my area to preserve our past.  I find local history fascinating but it seems we have gone out of our way to raze it, obliterate it, and forget it.  As a youth, I marveled at the wonderful Victorian homes in our town with their intricate gingerbread trim and stained glass windows.  They are mostly gone now, victims of "progress" in the form of big, boxy grocery stores and auto parts shops.  This is a town where marshals and outlaws engaged in shootouts.  Where thousands of German POWs were held during World War II.  Bonnie & Clyde committed crimes here.  But most residents have no knowledge of this history.  Even the city's 125th anniversary was overlooked last year.

When we forget our history, we might as well be burning it up because it disappears either way.
Posted by Wesley Harris at 3:55 PM 2 comments