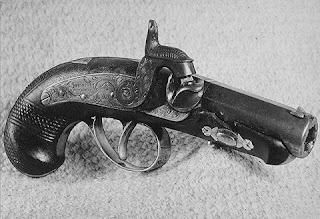 Was the pistol used to kill Lincoln stolen from its display in Ford's Theatre?
A small pistol reposes in a display case in Ford’s Theatre in Washington, D.C.  A sign identifies it as the weapon used by John Wilkes Booth to assassinate President Abraham Lincoln.  But is it the gun used to kill Lincoln or a clever fake planted during a burglary in the 1960s?
According to one source, the murder weapon was stolen from Ford’s Theatre one hundred years after Lincoln’s death.  The stunning allegation arose in 1997 during the adjudication of a New England estate.  Suzanne Kelley, the National Park Service site manager for Ford’s Theatre, said a man cleaning out his deceased mother’s home found some suspected stolen items.  The man called police, believing his brother, now serving time in prison, secreted the valuables in the house.  The incarcerated son was a member of a burglary ring that operated in New York and Massachusetts between the late 1960s and the early 1980s.

FROM LOUISIANA TO LITTLE BIGHORN

Custer's Men Rode the Hills of North Louisiana
The story of George Armstrong Custer and the destruction of his command at the Little Bighorn in Montana is well known. The “Custer Massacre” has been immortalized in movies, books, and music, albeit often with sensational inaccuracy. But only the most ardent Custer historians know of the significance of Custer and his famed 7th Cavalry in Louisiana history. 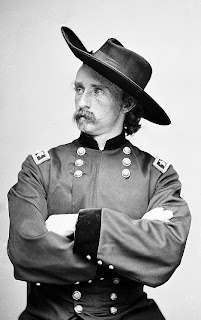 After a distinguished military career during the Civil War in which Custer experienced a meteoric rise through the ranks to become the Union’s youngest general, the brash redhead was sent to Alexandria in 1865 by General Philip Sheridan to take command of a cavalry division. After a respite in New Orleans following the long journey from Washington, Custer, accompanied by his wife Elizabeth, marched the troops from Louisiana to Hempstead, Texas, anticipating possible military action against Mexico. Elizabeth later wrote of her hardships in her book, Tenting on the Plains, published in 1887, recalling the exhilaration she experienced when the party finally departed the thick pine thickets of Louisiana for the open terrain of Texas.
Read more »
Posted by Wesley Harris at 5:15 PM 0 comments