RAY KROC, THE "FOUNDER" OF McDONALDS

This post is a response to an assignment in my “History of Capitalism” course at Louisiana Tech University.

I watched the 2016 film "The Founder," a portrayal of Ray Kroc of the McDonald's Corporation as part of a class assignment. Part of my assignment was to determine if the movie presents Kroc as a "villain." Is it even possible for Hollywood to make a film about a conservative Republican businessman and not make him look like a villain?  Probably not.  I read several reviews after watching the movie and several critics noted the film served as an indictment of President Trump-type capitalists.

Kroc was definitely a capitalist. He took an idea--some would say stole--and made millions. The movie is compelling, especially since we all know McDonald's--"billions and billions served." The first 30 minutes is spent building a sympathetic picture of the McDonald brothers who started the first restaurant. This serves to contrast the greed and ruthlessness of Ray Kroc as the movie progresses. 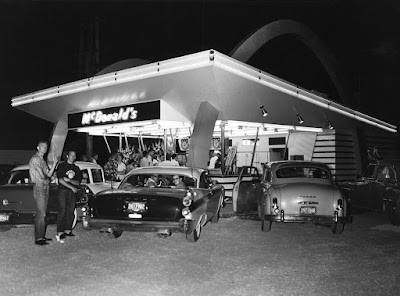 The movie portrays Kroc as a villain to some degree, although it does mention how he provided opportunities for financial success to many. There is no question that Kroc's operation has provided thousands of jobs and made millions for investors. But still, the movie tends to condemn his methods and motives. Emphasis is placed on how he "cheated" the McDonald brothers. At one point one of the McDonald brothers say, "We are not greedy men," implying that Kroc is. We are to assume that all capitalists are greedy. Kroc's actions are so ruthless that they supposedly stress one McDonald brother to the point he is hospitalized.
There are also attempts in the film to paint Kroc as a hypocrite. Through words and imagery, Kroc's patriotic and religious beliefs are mocked and his actions (divorce, lying, swindling, etc.) are portrayed in contradiction to his espoused beliefs. This is presented subtly but repeatedly. In one scene, Kroc tries to persuade the McDonald brothers to go national by equating the firm's "golden arches" with "flags and crosses," explaining that McDonald's restaurants should as common as churches. Or as Michael Keaton says in portraying Kroc, "McDonald's can be the new American church."
I have read articles before that praised Kroc for his business talent and innovation that led to one of the most successful businesses in American history.  "The Founder" is honest with us by noting at the beginning of the movie that it is "Based on a true story." I think we have to take the film as what it is--an Hollywood interpretation with its own perspective and motives. I recommend the movie but also reading more about this fascinating entrepreneur.